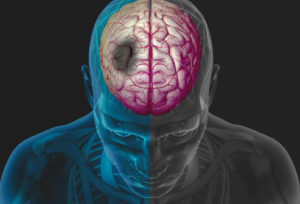 The prevalence of Sleep Disordered Breathing (SDB) after acute stroke is high1). SDB after stroke has been found to be associated with a faster progression of stroke severity, higher blood pressure levels and longer hospitalization in the acute phase,2),3).
Chronically, stroke patients with SDB exhibit worse functional outcome4) and a higher mortality5). The mechanisms leading to the detrimental effects of SDB on stroke outcome are multiple and include changes of cerebral hemodynamics and brain oxygenation6) as well as a number of humoral and systemic changes7).

Due to the high prevalence of SDB following stroke and its detrimental effects on stroke outcome, it is crucial to investigate whether early treatment of central, obstructive and mixed forms of SDB with Adaptive Servo-Ventilation (ASV) has a beneficial effect on the evolution of the lesion volume and on stroke outcome.

The primary objective is to assess whether an immediate onset of ASV treatment in stroke patients with severe SDB (sSDB, Apnea-Hypopnea-Index (AHI) > 20) has a favorable effect on infarct growth assessed as the difference in lesion volume before and 90 days after stroke. 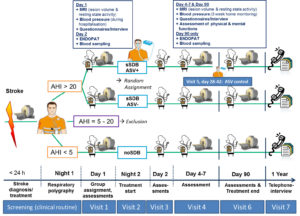 Stroke patients admitted to the hospital’s emergency unit must be continuously screened for study eligibility (criteria a.-e.). Acute evaluation of stroke etiology includes clinical assessment and performance of a standard stroke imaging protocol by MRI or CT (preferably MRI). Fulfillment of the AHI criterion f. must be assessed by a respiratory polygraphy performed during the first night after stroke. The next morning following stroke, patients with an AHI > 20 are randomized to ASV treatment or no treatment (sSDB ASV+ and sSDB ASV-). Patients without SDB (AHI < 5) are assigned to the comparison group. Patients with an AHI between 5 and 20 are not considered for study participation. This results in the following three study groups that are prospectively followed over 1 year:

Stroke severity will be assessed by means of the NIHSS (stroke scale of the National Health Institute) on admission, day 1, days 4-7 and 3 months following stroke. Quality of life, clinical outcome (Barthel Index & modified Rankin Scale) and death from all causes and new cardio-cerebro-vascular events will be registered at 3 months and 1 year following stroke. At 3 months the sleep disordered breathing will be reassessed by a respiratory polygraphy.

To obtain a more precise assessment of cognitive and sensory-motor recovery, attention, memory, executive and sensorimotor functions will also be assessed with neuropsychological tests on days 4-7 and 3 months following stroke.

The following physiological parameters will be assessed within the first weeks and three months after stroke:

All participants will be interviewed regarding their pre- and post-stroke sleep history, and complete the Epworth sleepiness scale and the Berlin sleep apnea questionnaire on admission and at 3 months and 1 year following stroke. Moreover, depressive symptoms at 3 months and 1 year following stroke are assessed using Beck’s Depression Inventory II.

For collaborating hospitals and centers a more compact and less complex study schedule as illustrated in Figure 2 can be discussed.

The frequency of SBD in acute stroke is high (over 50% in more than 20 studies). Therefore, it is crucial to investigate whether treatment with ASV has a beneficial effect on the evolution of the ischemic lesion volume and thus neuronal plasticity processes, which are sensitive to hypoxia and hemodynamic instability. Evidence for a positive stroke outcome due to treatment with ASV and a better understanding of the detrimental effects of sSDB following acute stroke will change clinical practice and improve patients well-being.